The first two alphabets that you learn are hiragana and katakana. These two are essential. Romanji is helpful to read because they help with pronunciation but I’ve never seen romanji in books not intended for language learners. When trying to read in Japan, most books (for adults) are written in kanji. Children’s books are written in hiragana. I wasn’t sure if I explained that in my first post.

The first book that I read, Tonari Totoro, had both kanji and hiragana inside. Which made it pretty difficult to read without the help of a dictionary and a helpful Japanese speaker. But this book, White bear Black bear was ALL in hiragana! It was much, much shorter and easier to read. I still needed help from a dictionary and a Japanese person.

There wasn’t as much colloquial language in this book as the last one but there were other roadblocks. For example, in this book the narrator is a white bear who is older than the reader. You can tell this because of the pronouns that are used when he addresses the reader. I wouldn’t have picked that up without help.

Anyway, I really enjoyed reading this book! It was a confidence booster. Many of the words that I learned from the previous book were here and I picked up some new vocabulary too. I celebrated every page that I understood. It was less of a chore and more fun to tackle. It actually made me very excited to read another book.

Because I completed this book in just 15 days and there is still time left in this month I will begin reading Curious George Rides a Bike. Hopefully, I can finish it and move on to the book I planned to read for March. 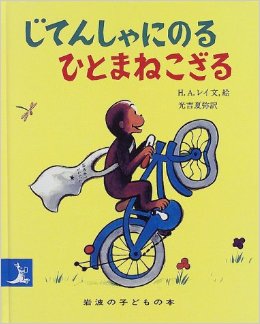