Lets do some time traveling, eh? Are you ready? We’re going back to June 2017 to relive some cool memories and get this blog on track to being up to date. Consider this the second resurrection.

I’m not sure if I’ve mention this or not but I have a few sets of parents. Of course, I have the original set bestowed upon me by the Big G. But then I’ve accumulated a few others that have been really humongous blessings to me. This particular surrogate is lovingly referred to as “My Japanese Mom”.

Her and “my Japanese sister” were students in my first adult English class at Shogai, the lifelong learning school that I taught at once or twice a week in Himeji. Of all the students that I met during those first few months in Japan, they were the two students who I could be “human Christina” with instead of “Teacher Christina”. Hanging out with them was never a chore I wanted to sleep through or neglect. We spent whole days adventuring in and around Himeji together.

On this particular day we were in for a treat. We made plans to spend our favorite day together, Saturday. My Japanese mom and sis met at the car park of my, then, apartment building and off we went. I should add a disclaimer. Or a few disclaimers, really. Many times, I had a very rough idea of what the plans would be for our Saturday adventures. So, I can’t say for certain whether I was aware of all that they’d planned or not. Both my mom and sis spoke beginner to intermediate level English and my Japanese was sorely lacking. I’d say I was on the higher end of beginner in my Japanese speaking and listening skills, at that point. This meant that we often spent a lot of time referring to dictionaries and notepads with common phrases to help us navigate the language barriers. Another thing worth noting is that, in my experience, Japanese event planning is much different than you’d expect. If you want to hang out or spend time with a westerner you could pop in for an hour or two and exit stage right with no qualms at your chosen time limit. But, with my Japanese brothers and sisters “hanging out” often involved one or two activities, a meal, and a dessert. Each at different locations. I joke. But not really. Now that I think about it, that could have also been due to the different age groups that I often spent time with. My younger Japanese friends were a bit more western, in that, they would provide you with more details about the event and generally stick to that event with the possibility of a meal left totally up to you. While my older Japanese friends were more inclined to give less details and want spend the entire day together.

I said all of that to say, that this was never an issue with my Japanese mom and sis.Even when I didn’t have a clear idea of our schedule Saturday was our day for adventure and we enjoyed spending time together. So it mattered very little where we were going or what we were doing.

Have you ever visited a sand dune? At that time I hadn’t. To be honest, at that point in time, I’d only ever seen the ocean once. I remember putting my toes in the Pacific Ocean on Malibu Beach one night when visiting Auntee in California. That was likely one of a handful of times I’d ever had the displeasure of dealing with sand.

Tottori is the capital city of Tottori Prefecture and was less than a two hour drive from Himeji. That was our destination that day. As I learned later, we were heading for the Tottori Sand Museum where they had a collection of sand sculptures celebrating the United States on display. It was amazing. If you’ve ever seen a child’s sand castle, take that mental image and multiply the expertise and size by 100. As someone who enjoys art, museums and most educational experiences, this was my jam. If you ever see an advertisement for a sand sculpture gallery or event, I encourage you to check it out. I know that many of the artists travel to events internationally. 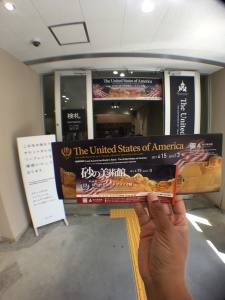 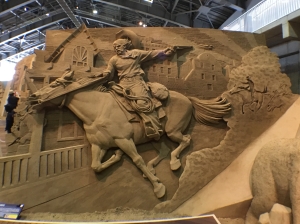 After spending some time walking around and admiring the time and effort put into all the sculptures, we took a walk to the actual sand dunes nearby. This picture doesn’t really speak to the height and breadth of these dunes but for some perspective I’ll give you numbers for scale. I’m 6’2. Can you see those tiny little dots up near my head? Those are people at the bottom on one of the tallest dunes we saw that day. By the time we got to the top of that thang we were done. 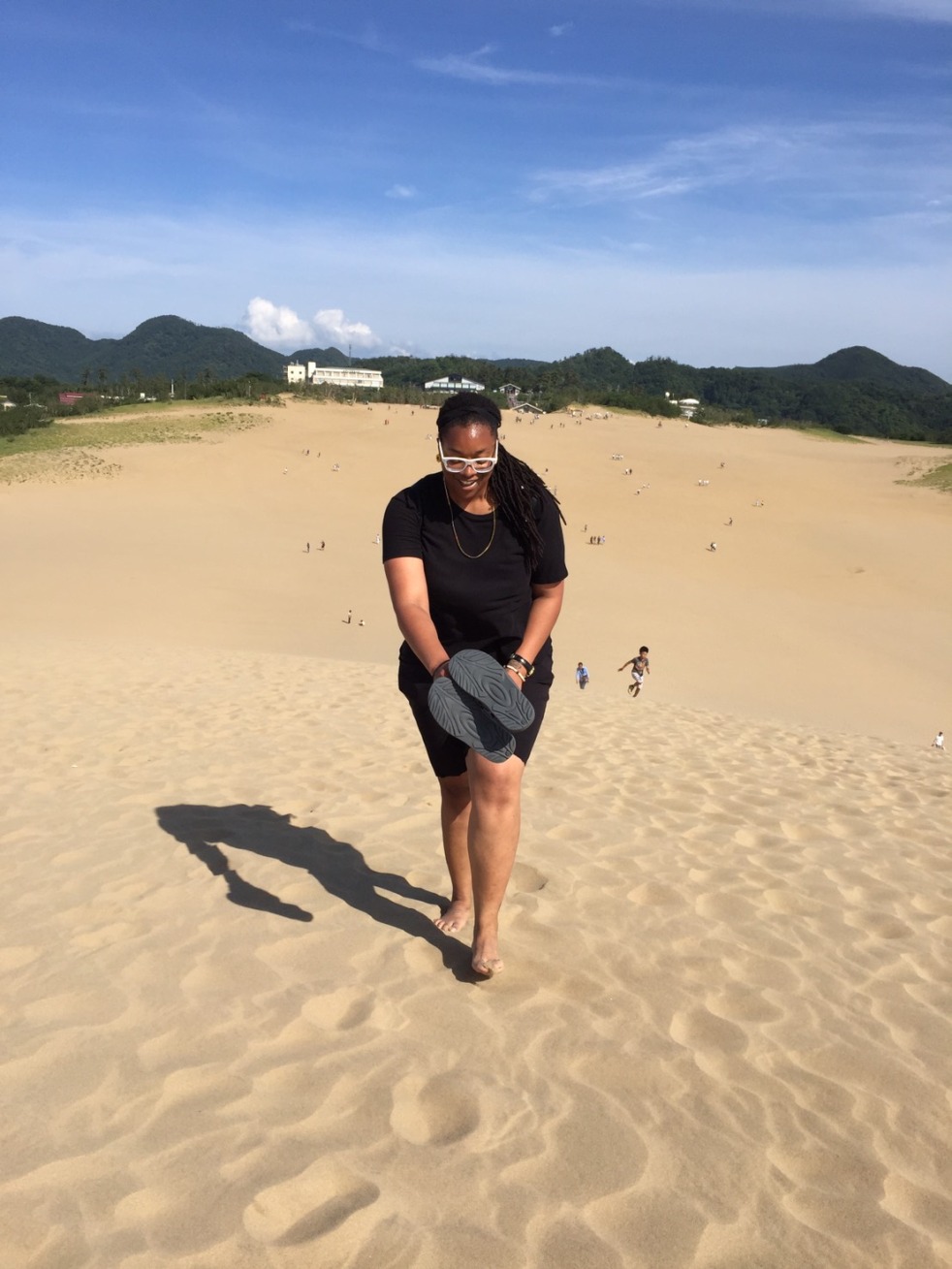 You can see that tallest dune off to the left of this second shot. Yeah. We climbed that. And on the other side was a cliff looking thing that dropped off so quickly it was scary. But if you were brave enough to make your way down that sand cliff you could walk along the water. And we all made it down there safely. The brave adventurers that we were. 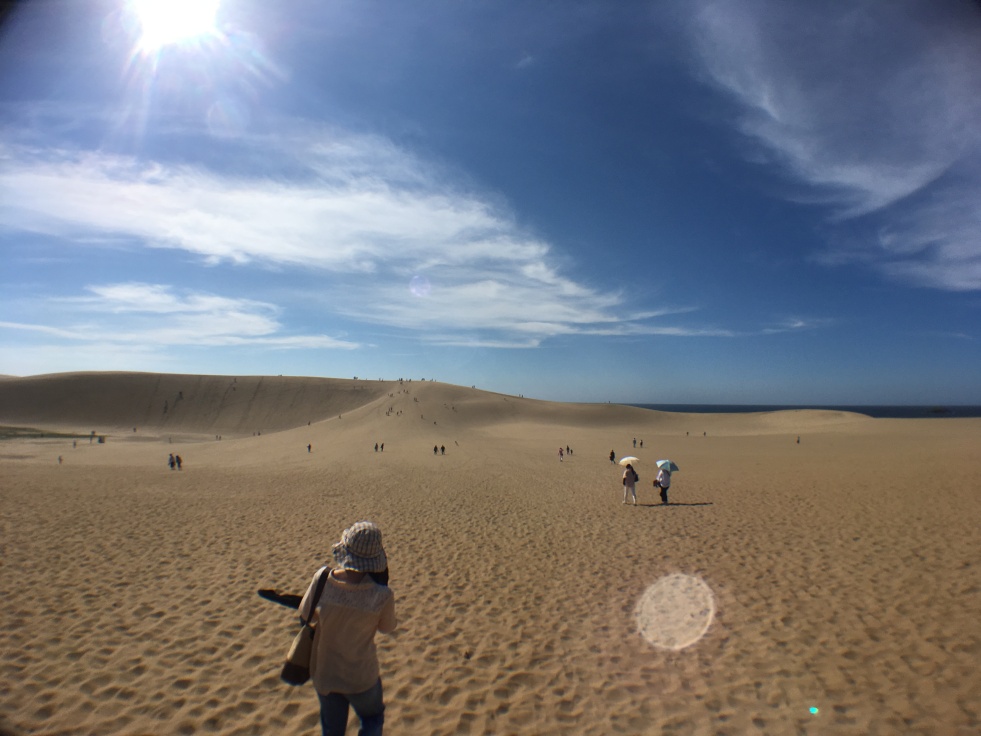 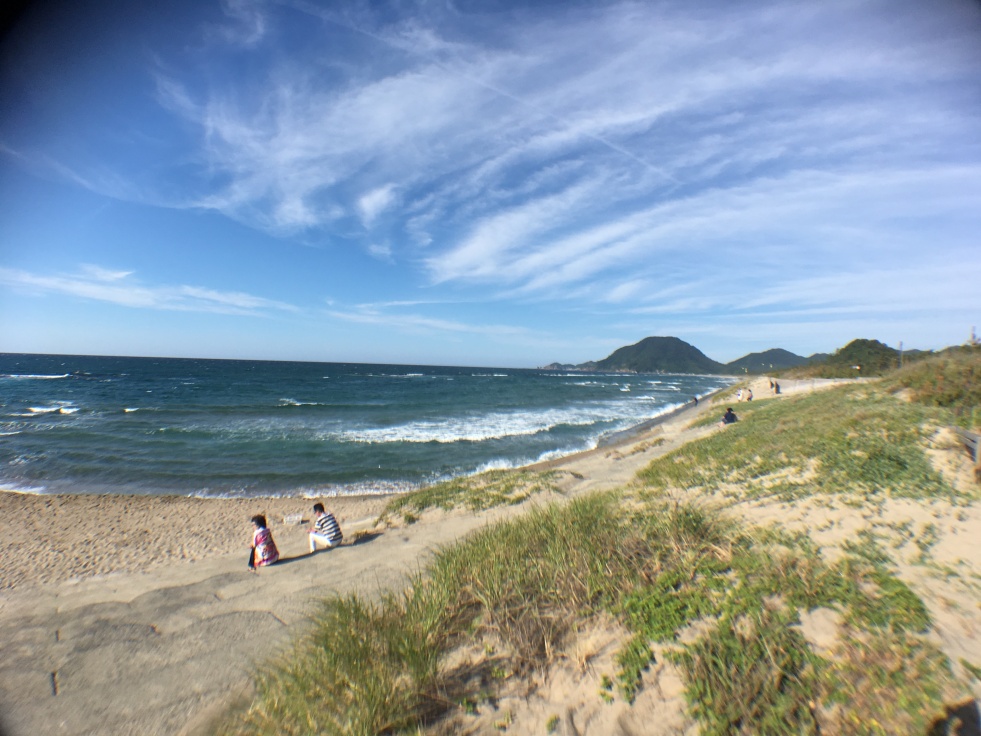 I’m pretty sure that this was the first time I’d ever walked along a beach in the day light. Heck, this was my first time seeing a sea in person. We saw so many sea shells. I still have a bag of sea shells from this trip. I’d never seen or experienced them in the wild. I’d only ever seen them in stores. So my collection is great. If I sent you a sea shell from this beach then you should know that it traveled across the Sea of Japan and numerous other vast bodies of water and land forms to get to you.

This next part is where my memory about the order of events takes a turn for the worse. My memory is blessed. But… I can’t recall whether we went to eat Nagashi Somen for lunch in Himeji during this trip or had pancakes at Coco Garden in Tottori. So lets pretend that we did it all on that same Saturday. Ok? I mean, to be fair we probably did all of this in one day. See the referenced Japanese event planning above.

Lets start with eating Nagashi Somen. This was an experience and a half. One, because I can clearly remember the winding road we traveled to get to this particular destination and the nausea that I experienced from that drive. Image one of those car/ tire commercials where they are zig zagging down a tree lined road off in the middle of a forest. Then imagine me in the back seat green about the gills. Prior to this, I’d never had any issues with car sickness or motion sickness. But, man. It’s a real thing now. Anyway, the somen was definitely worth the trouble. Really, those are the two memories that stick out. The somen and the nausea.

Somen is a type of thin noodle that’s usually eaten cold during Japanese summers. I’d previously eaten somen in Kagoshima during that road trip that I talked about here. But what makes this experience unique is the “Nagashi” part of the title. Nagashi means “flowing”. So image trying to catch a slippery noodle that’s floating down a water slide…with chopsticks. It was a hoot and a half. We each did a pretty good job of catching our somen before it fell into the blue strainer. It was hilarious watching everyone struggle. You can see a video that I took here. When your portion of somen was finished and you’d reached the end of the amount of noodles that you could afford, they sent a cherry down the water slide. Ain’t that sweet?! 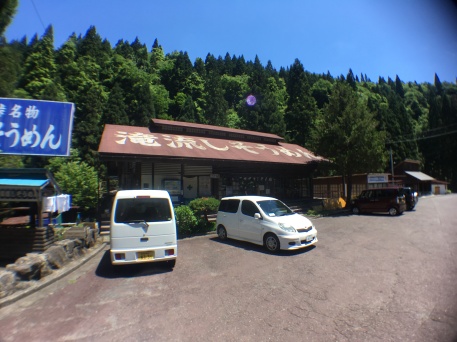 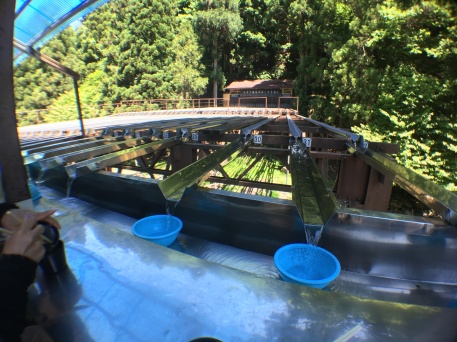 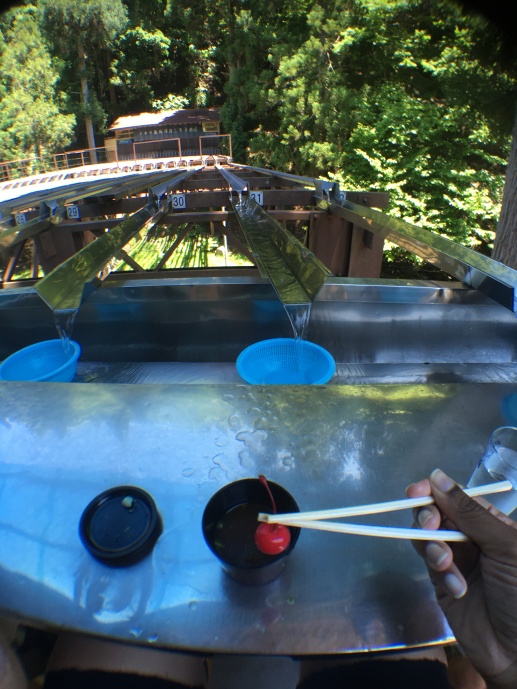 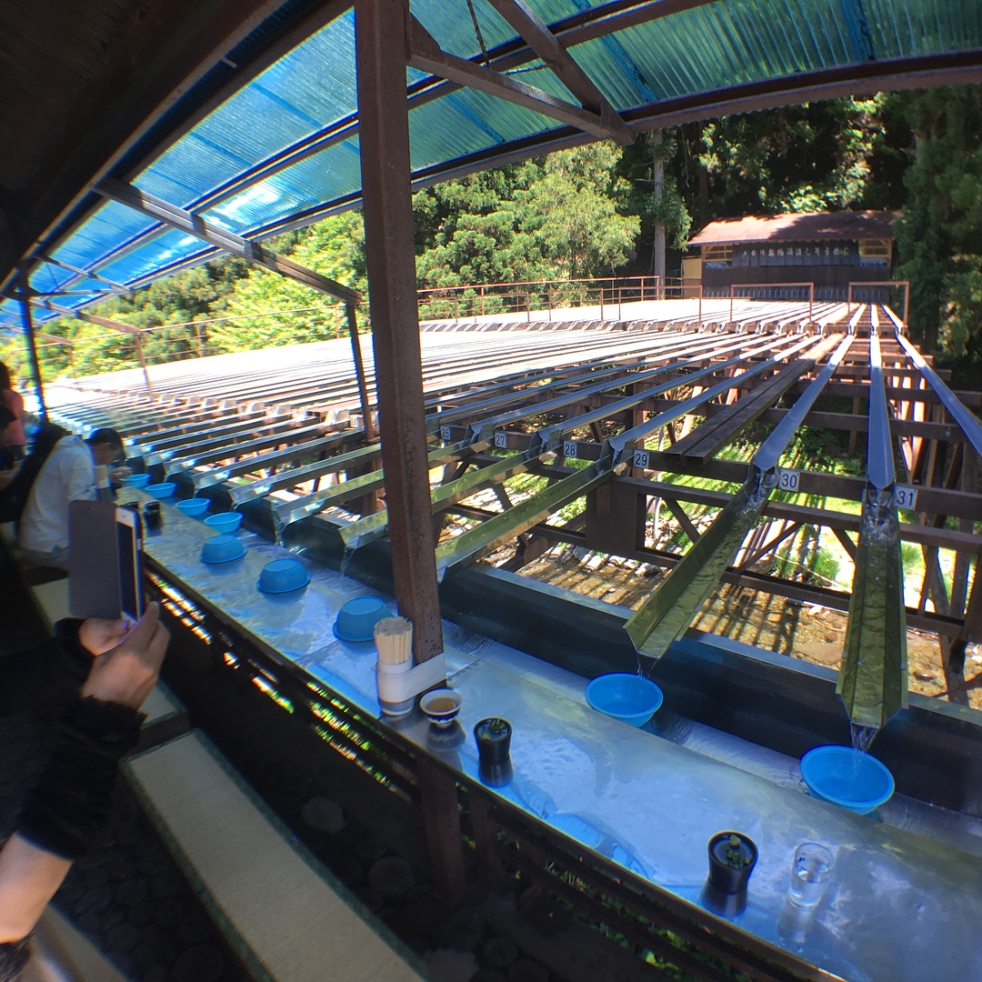 And finally, lets spend some time talking about pancakes. I love bread. And even though I rarely eat it anymore, I still have fond memories of bready things. For whatever reason, when I was in Japan I was obsessed with finding pancakes that were close to my memories of Cracker Barrels pancakes. As a side note, its been over a year since I’ve been stateside and I have yet to step foot in a Cracker Barrel. Go figure.

We drove almost two hours for what I was told were some pretty good pancakes. And y’all, I was not disappointed. They were fluffy and delicious. Again, they were dessert but still delicious. I learned that the pancakes were made with “Tenbiran/cage-free eggs”  which are only available at Coco Garden which is next to Oenosato Natural Farm. I’m talking about “hipster freshness”.

That wraps up June 2017. Stay tuned for the next post about July 2017 where I traveled to Okinawa, Malaysia, India, and Hong Kong in what I like to call my 30th birthday month travel extravaganza. 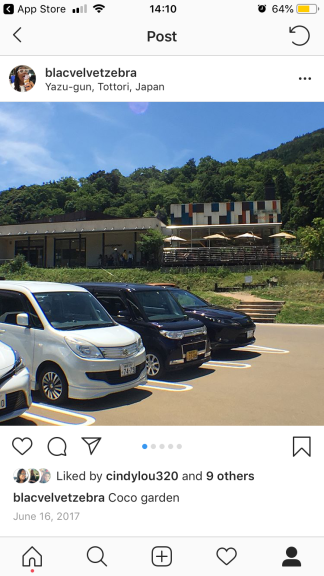 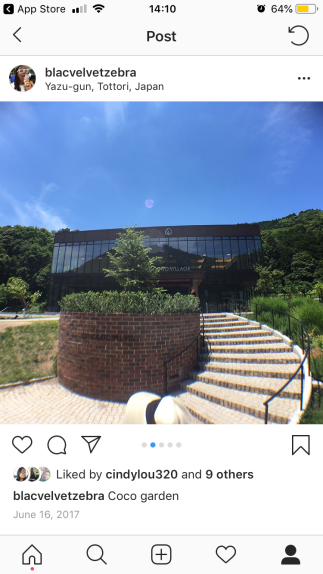 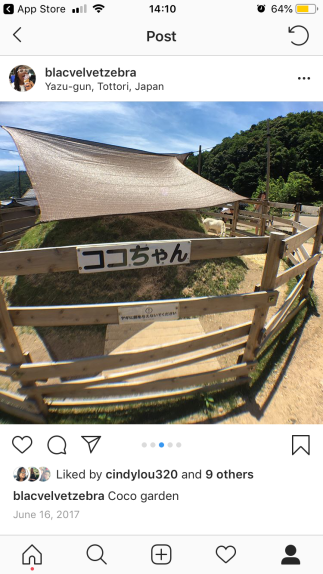 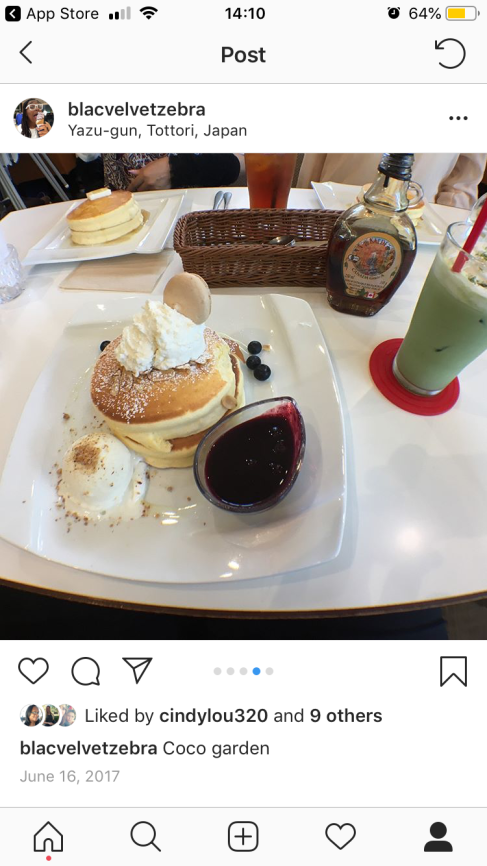 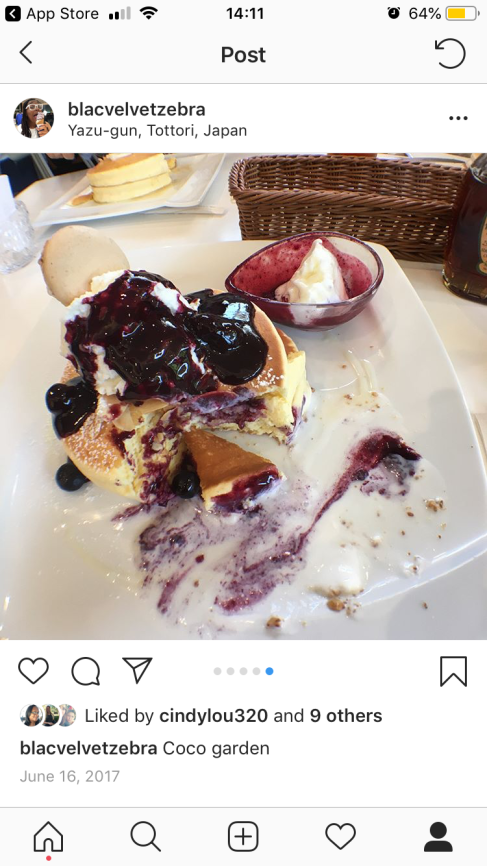